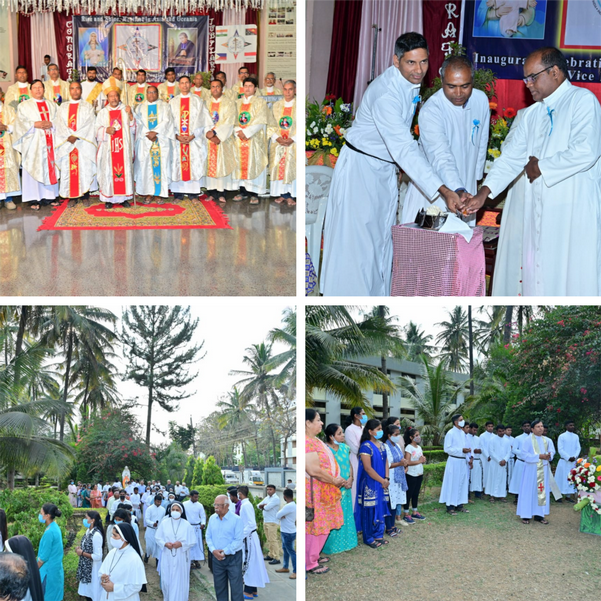 A REPORT ON THE INAUGURAL OF THE CONTINENTAL ASSEMBLY AND
SILVER JUBILEE CELEBRATION IN MARIA BHAVAN, BENGALURU
Maria Bhavan, Bengaluru: The Ceremony of the Inauguration of the Continental Assembly - ASIA OCEANIA, was held on the 6th of March, 2022, at Maria Bhavan, Bangalore. Along with this event, the Silver Jubilee of Religious Profession of Three Montfortian Confreres, namely Frs. Francis Bulipe, Reny Joseph and Mohan Vincent was also celebrated. Around 250 participated in the remarkable and memorable event, constituting of Religious from the neighborhood, Montfortian Associates, members and well-wishers of the Jubilarians and the members of the three Montfortian Families.
The program started at 3.00 pm with a preparatory Session for the Consecration of the Montfortian Associates by Fr. Reny SMM, in which Fr. Reny initiated the meaning of the Consecration. Thereafter, the Montfortian Associates were invited to prayerfully make their Consecration. After some refreshments, a Marian Procession was held around the Campus of Maria Bhavan, in which the Rosary was creatively recited and prayed.
The Archbishop of the Archdiocese of Bangalore Rev. Dr Peter Machado was welcomed at the entrance of Maria Bhavan by the Provincial Superior Fr. Peter Mascarenhas, in the presence of the Provincials of the Daughters of Wisdom and the Brothers of Saint Gabriel. The Holy Eucharist began at 5 pm, during which everyone was welcomed by Fr. Nashwin SMM. At the beginning of the Holy Mass, the Lighting of the Lamp was done by Dignitaries represented by the Three Montfortian Families along with the bishop.
During the Homily, the Archbishop focused his reflection on the readings of the Liturgy, reminding the Religious of the importance of the Three Religious Vows of Poverty, Chastity and Obedience and how they were interconnected with the Three Temptations of Jesus. He invited the Montfortians to reflect on the Mission and the Missionary work and to RISE AND SHINE. He also congratulated the Jubilarians on their memorable years as a religious member in the Montfort Congregation, and to be TOTALLY YOURS, TOTUS TUUS. The Jubilarians then renewed their commitment to religious life before the gathering.
After the Eucharistic celebration, the Official Inauguration of the Continental Assembly was done by unveiling the Map of the Continent of Asia Oceania. A prayer dance from Anugraha Children was performed. Thereafter the Provincial Superior presented the objectives of the Continental Assembly, such as: To Strengthen the fraternal relations within each entity; Establishing brotherly relations and co-operation between entities; To walk together towards the root that unites all these entities; and to intensify cooperation with many other people, especially with the laity inspired by Fr de Montfort.
In his Presidential Address, the Archbishop reminded the Montfortians that if they have to give meaning to their Continental Mission, it was necessary to work in Communion with other Entities, for that would be the only way to be true witnesses of the Gospel – to SHAKE UP AND WAKE UP. A short Cultural Presentation was presented by the Students of St. Joseph’s Institute of Skills, through the four different Cultural dances of the four Nations of the Asia Oceania Continent. It was followed by the song, RISE ANS SHINE, sung danced by the Scholastics.
The Felicitations to all the Dignitaries and the Jubilarians was given by Fr. Prakash SMM. He thanked them for their valuable presence, their services to the Church and the Congregation. They were all honored with a Shawl, Bouquet and a gift. Fr. Francis Bulipe representing the Jubilarians thanked everyone for their presence, support and encouragement during their years of Formation and service in their Mission. He especially thanked the members of the Family, Maria Bhavan Community and the Provincial Administration for making this day a memorable one. The celebration ended with dinner.
Fr. Anthony Pereira SMM

No comments
Recent Posts
News From:
Back to content